The commemoration date is April 12/25

Included in the Cathedral of New Martyrs and Confessors of Russia

The MonkMartyr Sergius (in the world Sergei Alexandrovich Krestnikov) was born on July 1, 1893 in Moscow in a family of a worker. He graduated from the parish school. The whole life of the future Martyr passed under the special patronage of his heavenly intercessor – the monk Sergius of Radonezh.

In 1905, when Sergei was twelve years old, he was accepted to the choir of the Moscow Pokrovsky Monastery and stayed there until 1915. Most likely, Sergei was a student of the monastic school for boys for 30 people, located outside the monastery. It was opened under the rector of Archimandrite Sergius in 1893, when the Holy Synod "on the occasion of the 500th anniversary of the blessed death of St. Sergius the Hegumen of the Radonezh Miracle-Worker", proposed the establishment of parochial schools for monasteries.

There were eight grades, students aged was between 14 and 23 years. Boys studied reading and singing, singing in the choir at the monastic services; monks and invited teachers taught them various sciences and disciplines.

After graduating from school after reaching the age of majority (21 years old), Sergei sang in Moscow churches for two years.

In 1918, he entered the Trinity-Sergius Lavra as a novice.

On the night of November 3, 1919, all the churches and cells of the Lavra were closed and the brethren have been sent to Gethsemane skete. The novice Sergius remained in the skete until 1922, and then became the choir Director and Psalm-reader Pyatnitskaya Church, located in the immediate vicinity of the walls of the ancient Russian monastery.

After the church was closed, in May 1928, the novice Sergius moved to the All Saints' Church at the Kokuyevsky Cemetery, where the Monk Aleksii Zosimovsky (Soloviev) was buried [3]. The elder Alexy was a famous confessor; the abbot, Archimandrite Veniamin (Milov), and the brethren of the Intercession monastery often went to confession to him. After the death of the elder Alexis in September 1928, numerous pilgrims flocked to the burial place, asking for help and intercession. The novice Sergius took care of his grave.

In addition, Sergius sang in the church choir and carried the obedience of the gatekeeper. Subsequently, he was elected chairman of the church council of the temple.  Like many of the brethren before the closure of the monastery, he maintained a spiritual connection with the last Governor of Lavra, Archimandrite Kronid (Lyubimov), who lived near Kokuev cemetery from 1929.

October 21, 1935, the novice Sergius, along with the clergy of the Church of All Saints - Archimandrite Maurice (Poletaev) and Abbot Maximilian (Marchenko), and the head of the temple Vasily Kondratiev, was arrested by the department of the NKVD of Zagorsk district and imprisoned in Butyrskaya prison in Moscow.

At the first interrogation, the investigator inquired about peoople with whom the novice Sergius kept is in touch.

Tell me, what conversations at the apartment by Abbot Marchenko conducted? -Asked the investigator.

The investigation has information that you among the people around you conducted anti-Soviet agitation, spreading provocative rumors about the war and allegedly the imminent death of Soviet power. What can you say on this issue? - Asked the investigator at the next interrogation.-

I did not tell anyone about the war and the death of Soviet power. Regarding religious issues, I said that the Soviet government fights religion, closes churches, and expels the clergy without any reason… Now the priests are punished by denying the right to vote, but before they lived much better.

For what purpose did you spread false rumors about the "healing" of the grave of the elder Alexis?

I did not say that.

How did you react to the closing of the churches?-

The Soviet government closes churches without the consent of believers and makes it wrong, and for no reason expels the clergy, depriving it of a normal life.

In what ways did you express dissatisfaction with the Soviet power with people around you?

I am dissatisfied with Soviet power by forcibly closing the churches without the consent of believers, and for no reason expels clergy and believers.

Do you plead guilty to the charges brought against you?-

I am anti-Soviet, because the Soviet power organized a persecution of religion, expelled the believers and clergy for nothing, and closed the churches without the consent of believers.

The investigator brought the dean of Zagorsky District Protopriest Dmitry Bayanov, priests Vitaly Lukashevich, Mikhail Pozdeev, Leonid Bagretsov and Alexander Maslov for giving testimony on the so-called "business of the clergy and churchmen led by Archimandrite Maurice". At the request of the NKVD investigators, the investigators made a false statement and accused them and novice Sergius.

Some defendants and witnesses showed that Sergius Krestnikov said that the clergy had been tortured with taxes, which the Soviet power "set out to liquidate all Orthodox churches in Russia." The investigator asked the novice Sergius what conversations were conducted among the monastics, to which he received an answer that religious topics were raised in the conversations. Some believed that the time of the Antichrist has already come, and for this reason, persecutions and persecutions for religious beliefs are intensifying. Nevertheless, he, said the novice, believed otherwise - that everyone was experiencing now the time before the arrival of the Antichrist.

In this investigation, Sergei Alexandrovich Krestnikov sometimes was called "monk-priest", but whether he was really in the veil, is unknown.

One of the false witnesses, in particular, said: "Krestnikov is the organizer of divine services of a monastic nature; he strove to fulfill the monastic church statute and the service of the akathists, and also tried to strengthen the monastic order in the community." 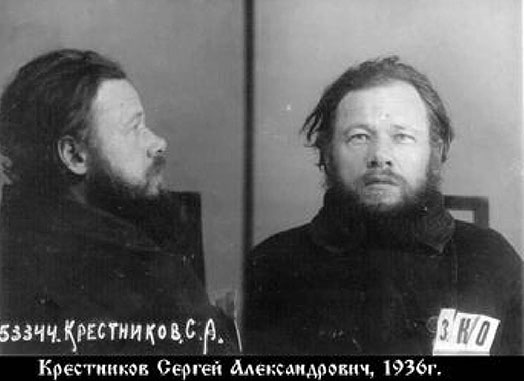 January 8, 1936 a special meeting at the NKVD sentenced the novice Sergius to five years of forced labor camps. In February, the novice Sergius was sent to the city of Chibi Komi ASSR at the disposal of the head of the NKVD Uhtpechlag administration.

In the camp, the novice Sergius performed the duties of the orderly. He was imprisoned at the time when a new wave of persecution against the Russian Orthodox Church arose, and those who were already in camps and prisons did not pass. On January 21, 1938, the novice Sergius was again arrested and imprisoned in the detention center in Chiby. He was charged with "having served his sentence in the NKVD Uhtpechlag, entered a counter-revolutionary group, and conducted counterrevolutionary activities among prisoners aimed at discrediting the current policies of the party and the Soviet government."

After the arrest, the novice Sergius was imprisoned in the detention center in the city of Chiby.

An interrogation took place on the day of the arrest.

-Do you plead guilty to the charges brought against you?

-I do not recognize myself as guilty. I told the prisoners that it's hard to live in the camp. I can show nothing more.

On March 15, 1938, the "troika" of the NKVD sentenced the novice Sergius to be shot. The novice Sergius (Krestnikov) was shot on the second day after Easter, April 25, 1938, and was buried in an unknown common grave. Thus ended the "good and faithful" slave of Christ, the whole life of which passed under the Protection of the Mother of God and the Monk Sergei of Radonezh.

By the definition of the Holy Synod of December 26, 2002, the novice Sergius (Krestnikov) was Included in the Cathedral of New Martyrs and Confessors of Russia of XX century. 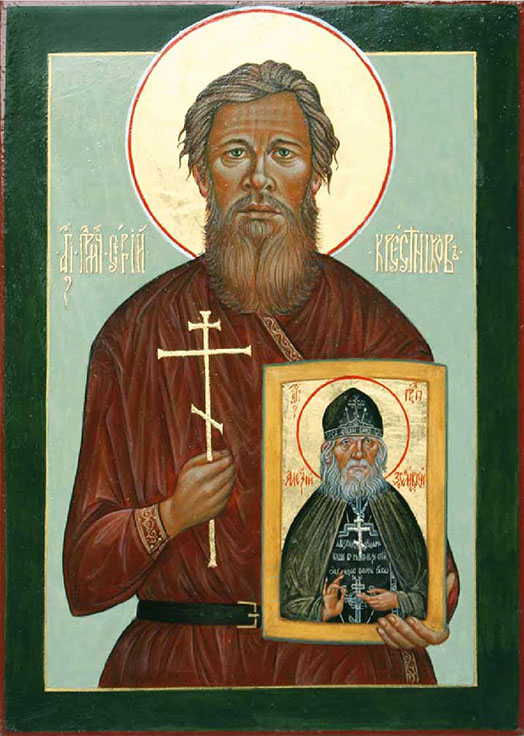 The commemoration date is April 12/25

Included in the Cathedral of New Martyrs and Confessors of Russia