The commemoration date is February 22/ March 7,

and in the Cathedral of the Butovo New Martyrs

The Monk Martyr Sergiy was born on January 23, 1884 in the village Chertanovo of Ostashevskaya parish Volokolamsk district of the Moscow province in the family of a peasant Vasily Bukashkin. He was baptized with the name Ioan. When the boy was thirteen, his parents sent him to the Chudov monastery that was situated in the Moscow Kremlin. Here the lad performed the choir singing obedience.

After three classes in the Theological Seminary, the novice John passed the exam for the title of primary school teacher. On 14 June 1914, he took the monastic vows with the name Sergiy. He was appointed a teacher of the monastic novitiate school.

In 1916, the monk Sergiy moved to the Moscow Intercession Monastery and in the same year was ordained a hierodeacon. Perhaps the relocation of Father Sergiy happened because there was a church-parish school for boys, as well as Moscow pastoral courses in Pokrovsky monastery. There were 400 students in 1916. The school needed teachers. The Bishop of Verey Modest was the Abbot of the Intercession Monastery in 1913-1917. The Abbot was acquainted with the future father Sergiy. Thus, father Sergiy, become a monk of Pokrovsky monastery, he taught in a parochial school and served in the monastery churches together with other students of pastoral courses, which often assisted the rector on Sundays and on public holidays.

After the revolutionary events in 1918-1919, many monks of the Intercession monastery, especially young ones, took vacations and went home for 3-6 months to visit their relatives. Not everyone could come back because of the raging terror everywhere. Someone, including father Sergiy, went to serve closer to home to be able to care for parents and other relatives.

In 1919, Hierodeacon Sergiy was appointed to serve in the Preobrazhenskiy Church at Spas-Ostashevsky, Volokolamsk district; in 1930, he was ordained hieromonk in the same Church. In 1935, the hieromonk Sergiy was awarded with the gold pectoral cross.

In February 1937, he was transferred to the Church in the name of St. Alexander Svirsky to the village Novo-Aleksandrovka of Shakhovsky district of Moscow region. In the summer of 1937, the merciless persecution of the Russian Orthodox Church began.

The investigator of the NKVD, in January 1938, summoned false witnesses for interrogation, who signed the interrogation protocols necessary for the arrest of Father Sergiy.

One of the false witnesses told what he knows about the counter-revolutionary activities of the priest: “The priest lives in the village of Novo-Aleksandrovka. Bukashkin gathers believers and leads among them active agitation for the faith in God. He conducts counter-revolutionary agitation against the activities of the Party and Soviet power. Therefore, in December 1937, he asked the group of believers to help the Church and the clergy: “Life for us under Soviet rule became very bad; the Soviet government strangled us with taxes. If you, believers, do not help the clergy and the church to pay the tax, the church will be closed”. After that, the believers gave him products and money. In October 1937, I, as the head of a voluntary fire brigade, checked the church building for the fire resistance. I offered the priest to fix all the stoves available in the church, in order to avoid fire occurrence. The priest Bukashkin answered me: "I don`t have any funds for repair, the Soviet regime robbed the church and took every little coin»”.

Other witnesses said that Hieromonk Sergiy stated "the elections to the Supreme Soviet is just a formality. According to the constitution, we can vote for anyone we want. But in face – we are forced to vote for previously selected candidates."  At the end of December 1937, at the Novo-Aleksandrovskii village, he said to the authorities, "The Soviet government already bankrupted us, but they took even too much from me. This is an abuse toward the clergy... You force me to go to your institutions and seek for the nonexistent truth; there is only a deception and nothing more in it". At the beginning of January 1938, he said, “the Soviet government is depressing the clergy, we can’t even breath. Priests everywhere and anywhere are arrested, and the authorities want to eliminate the Orthodox faith”.

On February 17, 1938, hieromonk Sergiy was arrested and imprisoned in Volokolamsk. The priest was interrogated the next day:

-                  The investigation has evidence. In December 1937, you expressed dissatisfaction and hostility to the existing system and to the taxes. It happened in the premises of the Novo-Aleksandrovsky village Council

-                  In December 1937, I was not in the Novo-Aleksandrovsky village Council, I did not express any dissatisfaction and hostility to the existing system, and did not tell anyone anything.

-                  I did not conduct any counter-revolutionary agitation against the deeds of the Party and the Soviet government among the people and; I did not express any dissatisfaction with the existing system.

-                  You`ve been charged for counter-revolutionary agitation against the Party and the Soviet government, do you plead guilty?

-                  I do not recognize myself as guilty, since I have never conducted counter-revolutionary agitation among the masses, - the priest replied.

On the same day, the investigations were finished and the opinion  was referred to the Troika.  On 27 Feb NKVD Troika sentenced father Sergiy to be shot, and he was transferred to the Taganka prison in Moscow. Shortly before the shooting, on March 2, the prison photographer took a picture of him for the executioner.

Hieromonk Sergiy (Bukashkin) was shot on March 7, 1938 and was buried in an unknown common grave on the Butovo range near Moscow.

On July 17, 2002, the Holy Synod listed him to the New Martyrs of Russia for general church worship. 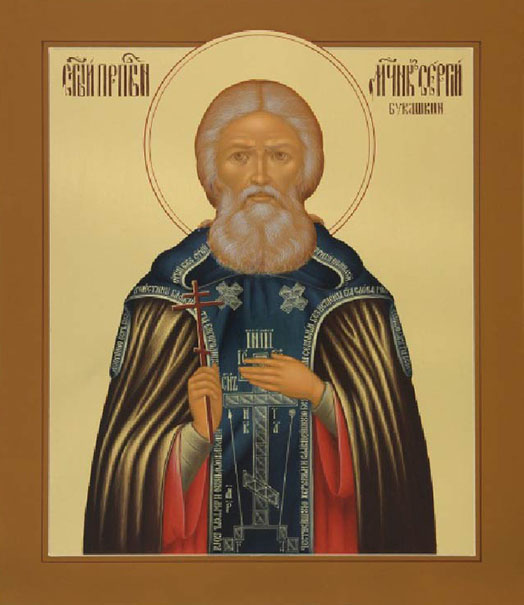 The commemoration date is February22/ March 7,

and in the Cathedral of the Butovo New Martyrs