The repose of Holy Blessed Matrona 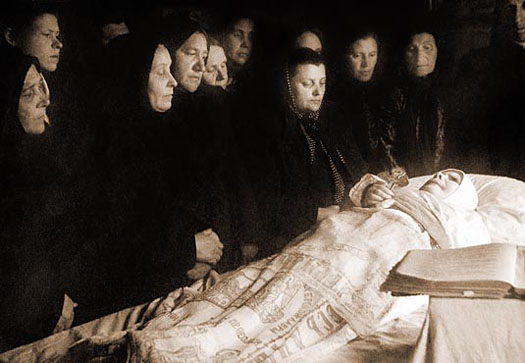 They say that the Lord revealed to her the time of her death three days before, and she made all necessary arrangements. Mother asked to have her funeral service in the Church of the Deposition of the Robe at Donskaya Street. (Back in those days, priest Nikolai Golubtsov, so loved by his parish, served there. He knew and revered blessed Matrona.) She forbade bringing wreaths or plastic flowers. 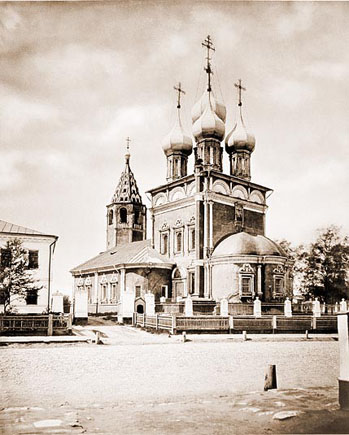 Moscow. The Church of lying of the planet of The Lord on Donskaya street. In this temple on the left sacrarium was performed a  funeral service for Holy Blessed Matrona

Until her last days, she confessed and had the Holy Communion from priests visiting her. Being very humble, just like ordinary sinful people, she was afraid of death and didn’t hide her fear from her loved ones. A priest, father Dimitry, came to take her confession before her death. She was very disturbed and folded her little hands properly. The father asked, “Are you afraid of death?” —”I am.”

On May 2, 1952, she passed away. On May 3, in Trinity Lavra of St. Sergius, a note was received on the death of the recently departed blessed Matrona requesting a commemoration service. Among many other notes, this note drew the attention of a hieromonk who served on that day. “Who gave the note? —he asked with agitation. — Did she die?” (Many inhabitants of the lavra knew Matrona very well and revered her. An old woman and her daughter, who came from Moscow, confirmed: mother Motryona had died the day before, and today the coffin with her body would be put in Moscow Church of the Deposition of the Robe. This is how lavra monks found out about Matrona’s death and could come to her funeral. Once the funeral service conducted by father Nikolai Golubtshov was over, all the people would come and kiss her hands. 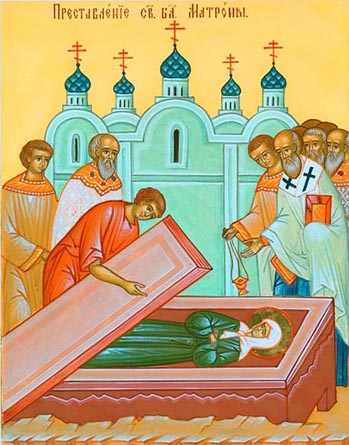 On May 4, the Sunday of Myrrhbearers, a funeral service for blessed Matrona was held with multitudes of people present. At her request, she was buried at Danilovskoye cemetery, in order to “hear the service” (one of few active churches of Moscow was there). The funeral service and burial of the blessed woman were the beginning of her glorification as a God-Pleaser.

The blessed woman predicted, “After my death, few people will be coming to my grave – only loved ones. After their death, my grave will become desolate, only some rare visitors will come... Yet in many years, people will know about me and come in crowds to get some help in their troubles and with petitions to pray the Lord God for them. And I will help everybody, and will hear everyone.” 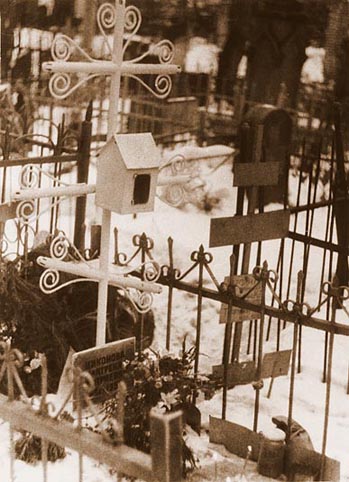 Before her death, she said, “All of you come to me and tell me, as if I am alive, about your afflictions, and I will see you and hear you and help you.” And mother Matrona also said that anyone who trusted themselves and their lives to her intercession before the Lord would be saved. “I will meet everybody at their death who asks me for help.”

In more than thirty years after mother Matrona’s death, her grave at Danilovskoye cemetery became a holy place for Orthodox people in Moscow. Many people from all over Russia and from abroad began to come here bringing their sorrows and illnesses. 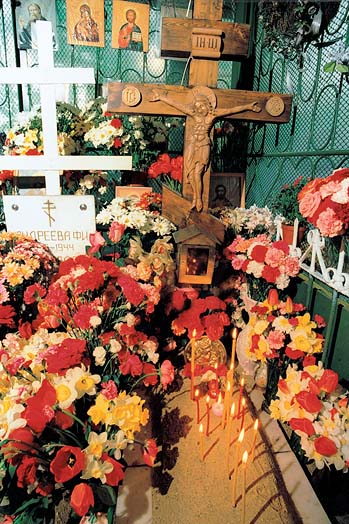 Holy Blessed Matrona’s grave on The Danilovskoe cemetery, The 4-th of March,1998

The blessed Matrona was Orthodox in the deepest and most traditional meaning of the word. Her compassion for people coming from the bottom of the loving heart, her prayer, the sign of the cross, faithfulness to holy ordinaries of the Orthodox church were the focus of her intense spiritual life. The nature of her heroic faith is rooted in centuries of traditions of people’s piety. That is why, the help that people got after addressing the righteous woman in prayers yields spiritual fruit: people gain foothold in the Orthodox faith, become part of the church both externally and internally, get accustomed to everyday life with pray.

Tens of thousands of Orthodox people know Matrona. They call her affectionately “Matronushka”. She helped people when she was alive, and she helps people now. This is the feeling shared by people who in faith and love ask her to intercede for them before God, to whom the Blessed Elderess greatly yearns. 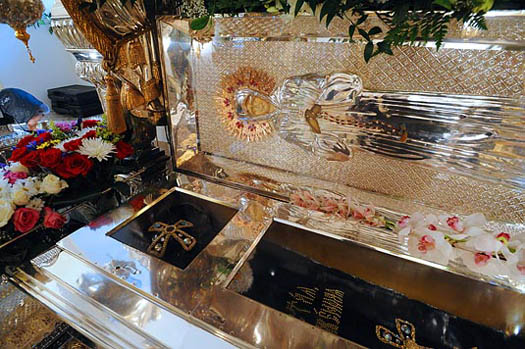 The reliquary of Holy Religious Blessed Matrona of Moscow. Pokrov Stauropegic convent. The  8-th of March, 2009 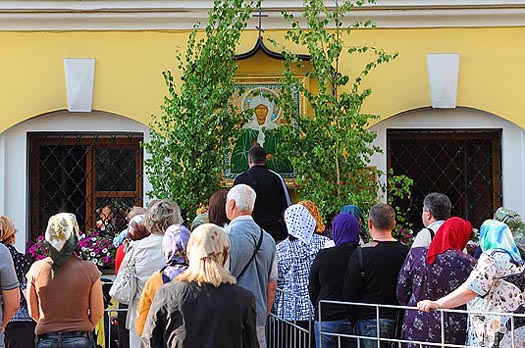 Trinity Sunday. Pentecost. The 23-rd of May,2010. Many people from all over Russia and from abroad began to come to Holy Religious Blessed Matrona  bringing their sorrows and illnesses.

The life of the Blessed Matrona

BLESSED Matrona (Matrona Dimitrievna Nikonova) was born in 1881 in the village of Sebino, Epifan Uyezd (today Kimovsk District), Tula Governorate. The village is around twenty kilometers away from the well-known Kulikovo Field. Her parents – peasants Dimitry and Natalia – were pious and hard-working people living in poverty. There were four children in the family: two brothers – Ivan and Mikhail, and two sisters – Maria and Matrona. Matrona was the youngest. She was born when her parents were no longer young.

The Moscow period of live of Blessed Matrona

In 1925 Matrona moved to Moscow where she lived for the rest of her life. The huge capital had plenty of miserable and lost people who had fallen away from faith, as well as spiritually sick people with poisoned conscience. Living in Moscow for about thirty years, she performed the ministry, which prevented many people from death, and brought them to salvation.

The repose of Holy Blessed Matrona

They say that the Lord revealed to her the time of her death three days before, and she made all necessary arrangements.

The Invention of the relics of Blessed Elderess Matrona

On the night of March 8, 1998, on the week of the Feast of Orthodoxy, with the blessing of Patriarch of Moscow and all Rus Alexy II, the true relics of the 20th century piety hero Blessed Elderess Matrona were translated at Danilovskoye cemetery in Moscow.

The translation of the relics of Blessed Elderess Matrona

On April 30, with the blessing of Patriarch Alexy II, to solemn chanting of Easter troparion “Christ is risen from the dead...”, the Holy relics of Blessed Matrona were translated to the church of Holy Father of Seven Ecumenical Councils.

The canonization of Holy Religious Blessed Matrona of Moscow

The solemn canonization of Elderess Matrona was performed on  may 2, 1999 by the service of the Holy Patriarch of Moscow Alexy II.

THE TRUE STORIES ABOUT THE MIRACLES 2006

THE TRUE STORIES ABOUT THE MIRACLES 2006

THE TRUE STORIES ABOUT THE MIRACLES 2005

THE TRUE STORIES ABOUT THE MIRACLES 2005