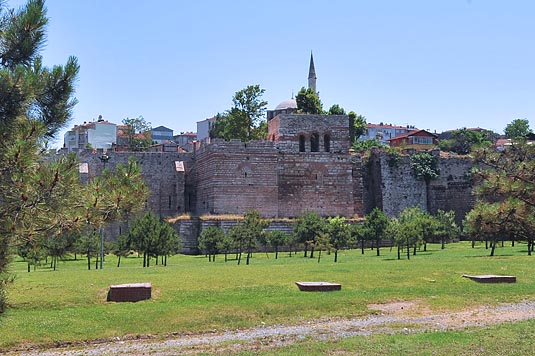 Vlachern Church of the Holy Virgin. In honor of the Holy Virgin’s visitation in this temple, the Orthodox Church established the Feast of Intercession. It is the famous church in the history of Eastern Christianity, was once standing at the imperial palace in the Constantinople suburb of Vlaherna, near the Golden Horn Bay

According to legend, this phenomenon is depicted on icons. We do not know any Greek depictions, so we shall talk only about Russian ones that we know about. The Mother of God is depicted with hands raised in prayer asking Her Savior for blessing. She stands on a cloud over the Holy doors. Two angels hold a prostrate veil or omophorion over her.

There are three Saints in armored vestments at the throne behind the right pillar of the temple, and two angels behind the left pillar.

In the lower row of the icon, on the left side, there are  the faces of the Saints, led by John the Baptist; on the right side, there are faces of the Saints with the fool in Christ St.  He shows his vision to the St. Epiphany, who depicted as a deacon with a book in his hands. On the roof of the church we can see St. Demetrius of Thessalonica, St. Cosmas and Damian. This is the Icon of Novgorod's painting, XIV century, three spans. You can find it the Mirovarnaya Chamber of the Synodal House in Moscow. 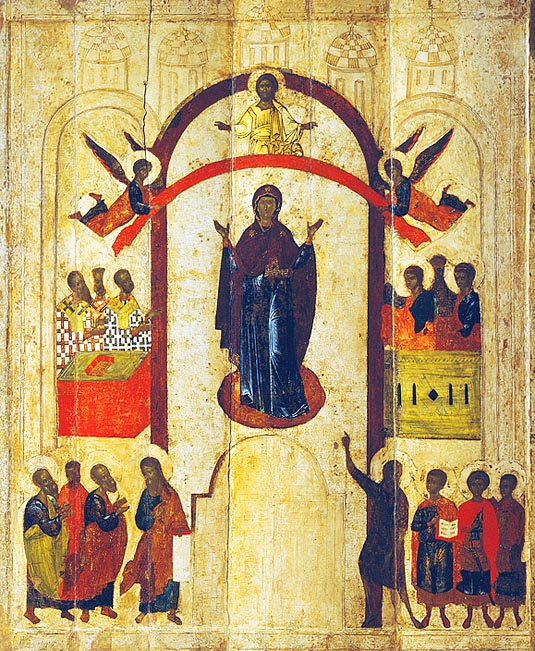 Cover of the Mother of God. From the Zverin Monastery. 1399

A similar image occurs among the Novgorod icons of the 16th century. Later painted Moscow icons (one of them is the icon in the temple of the Intercession Monastery too) differ from the oldest Novgorod's painting. The Mother of God, surrounded by the faces the Saints, overshadows her veil in the temple herself, overshadows her veil everyone standing in the temple. Among them are the king Lev the Wise and the queen Zoya, the priesthood Patriarch Tarasy. On the pulpit there is a sweet-bearer deacon Roman holding in his hand a charter with contakion: «The Virgin is in the Church today» etc., which reminds us of the song that was once sung on the Feast of the Nativity of Christ. Apparently, the sweet-bearer, remembered by the Russian Church on the day of the Intercession, belongs to the face of the celestials, because he lived five centuries before this vision. Besides the Saints, laymen are depicted listening to the all-night vigil at the Blachernae temple, where the Virgin appeared. It was questioned in the “Stoglav”, whether should one write on the icon of the Intercession of the Mother of God kings, princes, saints and the people in the lower row. The answer followed: «according to the most famous painters of Greece and Russia, countless people were depicted on the icons of the Intercession of the Mother of God praying for the whole world». Though in the ancient Novgorod icon, as we have seen, only the Saints are depicted, only the phenomenon was probably originally written, and in the later icons the phenomenon was connected with the event. The image of the miraculous appearance of the Mother of God is so different at different times and places.

Speaking about the Celebration, it is important to mention the fact that we cannot find it in festal Menaion, in the Greek kondakar of the 13th century, and the newest menologies. During the Times of Troubles in the Greek Empire this Celebration didn’t have a chance to get it’s complete church liturgical type, albeit the beginning of his celebration comes from Constantinople. Our homeland adopted this feast in memory of the patronage of the Mother of God, categorized it as polyleic and all-Russian.

Words in the festive canon (canto 8; song 8) lead to the probable conclusion that the Metropolitans of the Greeks resumed celebration of this holiday in Russia due to their Greco-Slav origin: «Pray for us», they say, «for us, who glorified the Feast of the Intercession in Russia». The establishment of its prologue in Russia also happened thanks to one of our ancient metropolitans: «You listen to us; you hear all our terrible thoughts and not merciful visions, you trust us, you are standing up for us. You want to be without a holiday, and your holy Cover will not remain without a holiday! » This holiday was established on October the first in the rules of church singing of XIII century; it was named to be new in Milyutinskaya Menaia. The churches in memory of the Protection of the Mother of God began to be built in other Russian cities after the establishment of this spiritual celebration in Kiev.

People in Vladimir in XII, Suzdal in XIII, Novgorod, Pskov and Tver in the XIV century already prayed in churches dedicated to this miraculous phenomenon of the Mother of God, while the temples in honor of this holiday were still unknown in Moscow.

Repulsion of Vladislav army’s attack was celebrated by the construction of the first cathedral in the village Rubtsov near Moscow. This cathedral was renamed, according to the temple, Pokrovsky.