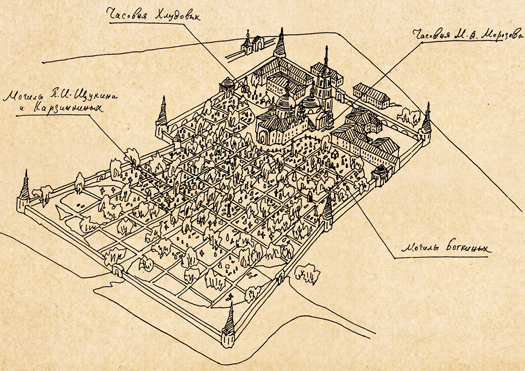 Necropolis of the Intercession Monastery in Moscow

Significant people buried in this monastery:

А. Under the Intercession Church, in the side-chapel of St. Metropolitan Jonah:

2. Georgian Archbishop Paphnutius, died in 1823. The Georgian Tsar George XIII, the children of the prince:

6. The daughter of the Imeretian Tsar Solomon, the wife of the Georgian prince Konhoros-Abashidzo, the princess of Darius, died in 1827.

7. Alexandra Ivanovna, the pious wife of the Collegiate Soviet, nobleman and chevalier Alexei Ivanovich Lobkov. His venerable parent, Ivan Prokofievich, was buried in the monastery cemetery.

Under the Resurrection Church there are:

8. The neophyte Metropolitan of Iliopol and Lebanese, cf. 1853

9. Nikolai Petrovich Khlebnikov, died in 1806 and his mother, the general-auditor-lieutenant Irina Yakovlevna Khlebnikova, died in 1812. Above them was erected a monument of exquisite foreign work of white marble, representing angels, in the growth of a man leaning on the urn.

10. The girl Anna Dmitrievna Poltoratskaya, the daughter of Mrs. Khlebnikova, died in 1820. She, upon her mother's request, arranged a women's almshouse for 12 people at the monastery, with the provision of 7114 rubles in silver, today there are 20 people in this hospice under the care of the monastery.

12. Collegian Assessor Pavel Stepanovich Lupandin, died in 1850. He donated capital of 25,722 rubles in silver in 1839, for the construction of the monastery. On the next year, when this capital has increased by more than 20,000 rubles, the constructing of another two-storied stone monastery building has started. It was 12 fathoms of length, it could fit up to 40 people and even more. The interest from the capital was enough for all those people.


15. Nicholas, the builder of the Belopez monastery.

19. Abbess: Athanasius of the Ascension Monastery.

The Moscow merchant class was buried mainly here. There were many worthy and pious people.The honorary citizen Mikhail Krasheninnikov was buried near the entrance to the Resurrection Church. He died in 1849. The percentage from his capital was donated to many poor families, especially to poor girls when they were getting married.

Here are many priests of parish churches; monks and nun from monasteries located within Moscow are buried. 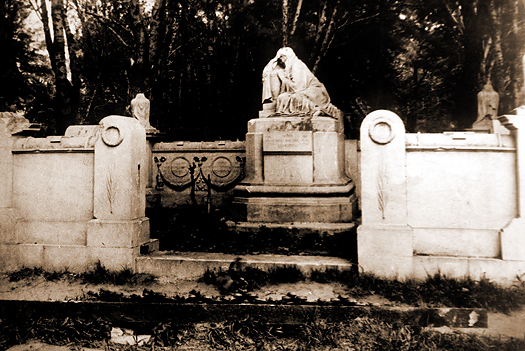 Memorial composition on the grave of P.I. Shchukin