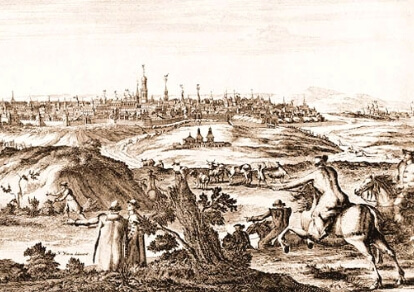 General view of Moscow to the construction of the Pokrovsky monastery. Year 1636

In the very beginning of the 17th century, before the construction of the monastery, among the groves and gardens, on an empty field, which was once occupied by inferior camps and a village for the repulse of the Tatars and Lithuanians, there were a Wretched house behind the Tagansky or Bolvan gates. The corpses from the neighborhood had been brought here. In May, 1606, the horsemen and the crowd of mobs followed this dung trail, which the nag was dragging. A naked and disfigured corpse of a young man laid in the corpse. The crowd followed him not with prayers and blessings, but with swearwords  and curses, because the Church anathematize him. This disgraced man was carried from the royal palace, from the throne to the stinking pit of the Wretched House. At the same time as this trip lasted, the same storm was raging, as the one, which had been raging, while the Dimitri Pretender's entry to the Kremlin.

The cart did not pass through the gates of the Wretched House with the corpse, so as the corpse was dragged from the cart and thrown into the pit. Who did not recognize here False Dimitry, to whom fate has not given rest and in the disgraced grave?

As if to proof the ancient superstition, within seven days, as the corpse of False Dimitry lay in the Wretched House, after the storm, severe frosts ensued, fatal to the gardens and fields; snow fell. Some terrible phenomena seemed to be there, clicks and howls were heard. The Pretender's body was then carried by invisible force from one place to another, then two pigeons sat down on the corpse and flew off when someone approached him, and again flew in. The boyars commanded to bury the dead man in the ground; but he appeared in another cemetery.

The people were worried. A contemporary of events says: "Some people  esteemed Otrepyev as an extraordinary man, others as a devil, at least they talk about him as about a sorcerer, taught infernal art by Lapland wizards, who kill themselves and afterwards come to life." The Superstition of that time, all such phenomena attributed to the magic of the hated dissection, the clerk of the Jesuits.

On the 28th of May the corpse was sent to the village of Kotly near Moscow, where he was burnt and his ash was fired from the cannon in the direction from which the False Dimitri came. Six days later, after the ashes of False Dimitry were sprawled, the relics of St. martyr Demetrius Tsarevich, whom Otrepev had pretended to be, where brought from Uglich.